Before and After – The Jim Bridger Power Plant 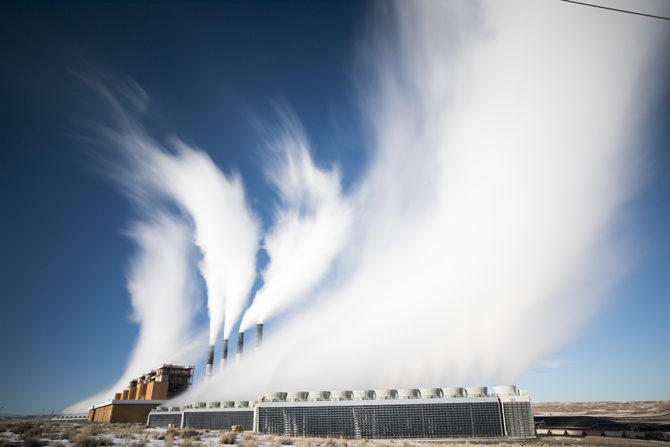 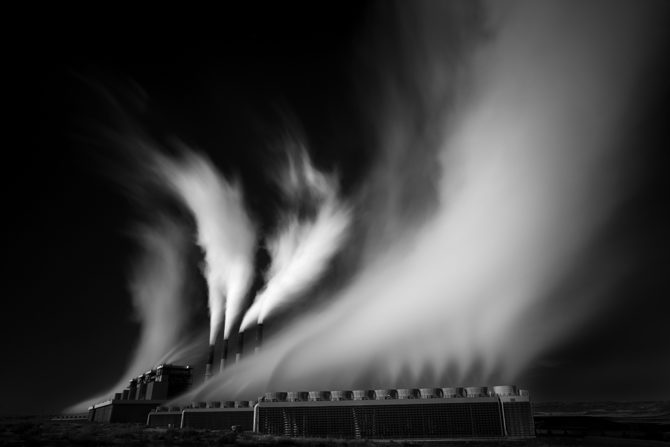 This is a “before and after” of the Jim Bridger Power Plant that I created recently.

The before does not differ a great deal from the after, but there are a few differences. Can you spot them?

I like to use the word “create” rather than “capture” when talking about my images.

Because a “capture” implies that the image is an accurate representation of reality, as the scene appeared to the camera and eye.

I like “create” because it suggests that the image is not accurate, but rather it has been created through my Vision into something new and different.

And when did the “Vision” for this image occur?

When I first saw this power plant from I-80 from several miles away. As soon as I saw it, the Vision of the final image appeared in my head and guided how I shot it, how I exposed it and how I processed it.

Vision was the driving force.

Why am I always mentioning Vision? Because it breaks my heart to see people chasing equipment, technique and gadgets…thinking that these things are key to creating a great image. Those things can certainly be “elements” of a great image, but not key and not even always necessary.

So please, focus on your Vision! I spent most of my photographic life pursuing the wrong things and was lucky to have a mentor who was even more bull-headed than I am, and argued that I did not need document, but rather I could create.

This Week in Photo – Behind the Shot – The Angel Gabriel

Moai, Sitting for Portrait – Exhibition at the Lincoln Gallery 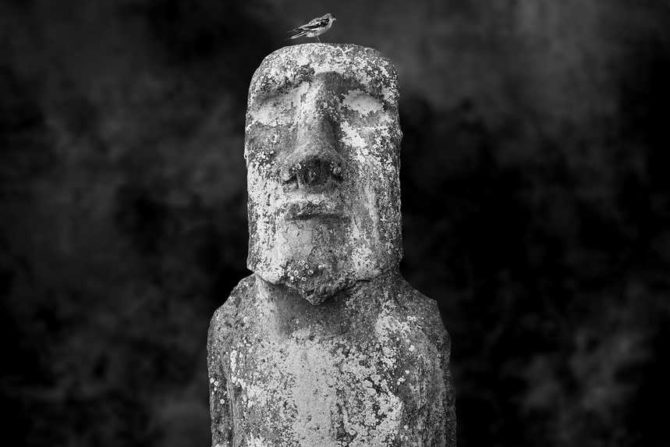 My “Moai, Sitting for Portrait” series will be featured at the Lincoln Gallery in Loveland, CO for the month of June with an opening reception on June 9th.

Here is the artist statement for this series:

In January of 2015 I spent two weeks photographing the Moai of Easter Island. This fulfilled a lifelong dream, one that started when I was 17 and read the book “Aku Aku” by Thor Heyerdahl. I became fascinated with the Moai and they have been on my mind and influenced my art for these many years.

As I traveled to Easter Island and tried to imagine what I would encounter, something interesting happened: I fell asleep and dreamt that I had invited the Moai to come and sit for a formal portrait.

When I awoke I thought “why not?”

I knew there would be challenges: the Moai are reserved, aloof and almost unapproachable. They had suffered greatly at the hands of outsiders and the question was: would they come to trust me?

Distance was the first hurdle to be overcome: the island is small by automobile standards, but when we are talking about the Moai who walk everywhere, traversing the island to get to my makeshift studio could be difficult. Then there was the Moai’s physical condition: many were incapacitated by war and the ravages of time and could not make the journey. And how would I accommodate the size of the Moai, with some towering 33 feet tall?

Facing these challenges and armed with nothing more than a dream and hope, I issued the invitations…but would they come?

Initially only a few came; the younger and less suspicious ones. But slowly, as word spread of their experience, others started to arrive.

Photographing the Moai created some interesting situations: one older Moai refused to allow me to photograph his face and turned his back on the camera. Another arrived with a hawk and insisted on having his portrait taken with the bird atop his head. Several Moai with bullet wounds, inflicted by outsiders, insisted that I document those scars.

And there were tense moments, as two rival Moai came together face-to-face in the studio, but which ended well when they agreed to be photographed together. And there were touching moments as old friends were reunited after years of separation.

The Moai are quiet, stoic and could even been described as “stone-faced.” And it’s true, not once was I able to photograph a Moai smiling, but instead they have a dignified poise that transcends time.

Here are the exhibition details:

If you are in the area, I hope to see you there!

New “Dunes of Nude” Images in Newsletter No. 99 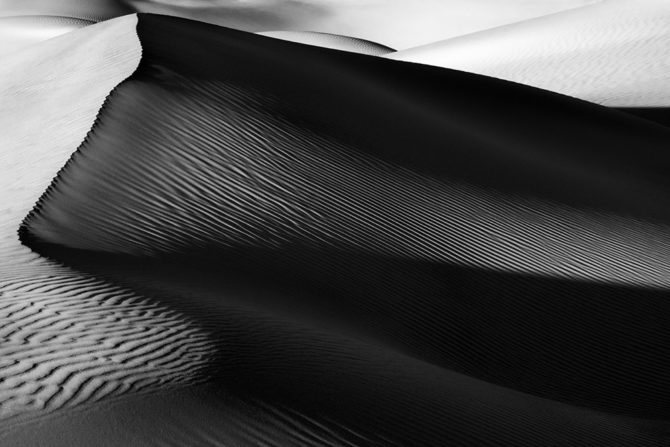 I’ve just sent out Newsletter No. 99 with ten new “Dunes of Nude” images.

If you’re already subscribed to the newsletter…check your inbox!

Over the last couple of weeks I have had the pleasure to speak with Dasha from Alter-View.

The result is this interview:

A Nice Note from the Jim Bridger Power Plant

If you’ll recall from a couple of weeks ago, I sent a print of this image to the Plant Manager of the Jim Bridger Power Plant. (you can read the story below)

I just received a nice note from him:

I was heading to Death Valley by way of Wyoming when I spotted a huge steam plume to the north of I-80. It turned out to be the Jim Bridger Power Plant.

It was a cold and sunny day and the white water vapor almost glowed against the dark blue sky. I shot three exposures. My practice is to name my image the first thing that pops into my mind and so I named this “Jim Bridger Power Plant.” But what I wanted to name it was:

I was photographing for only a short time before a security guard drove up and said that I was not allowed to photograph the power plant. I’m used to this protective (yet ignorant) behavior and politely asked if I was on a county road or a private road, to which he responded “a county road.”

I then explained, still politely, that I was allowed to photograph the plant as long as I was not trespassing. The next exchange went like this:

I could see that I was getting nowhere and so I asked him to call out the Sheriff to settle this dispute. I was hoping that he would be better versed in the law than the security guard, but from past experience I was giving it only a 50/50 chance.

About 20 minutes later several men arrived and one approached, introducing himself as the plant manager. (I was feeling bad now, for disrupting his day over something like this)

He proceeded to tell me that I could not photograph the plant, and I again asked if this was a county road or a private road to which he responded “a county road.” I again made it clear that I could photograph anything I wanted as long as I was not trespassing. Again the verbal dance:

It was clear that this conversation was going about as far as the other and one so I offered to show him the images, to put his mind at rest that my activities were harmless. He accepted my offer and was quickly satisfied that there was no “clear and present danger.”

We ended the encounter by him explaining his post-911 concerns and I acknowledged those as legitimate. But I said, I still have the right to photograph the power plant….and around we went again!

And that is why I wanted to name the image

We ended the standoff, by agreeing to disagree.

I’m going to send him a print of this image, he was a nice guy who was just trying to ensure the safety of his power plant.

I’m in need of bringing my website into the 21st century, right now I’m like the Moai of Easter Island.

I would like someone to design it so that I can easily maintain it after that.

I’m hoping to find someone who would be willing to trade services for my art, either partially or fully.

If you’re qualified and interested, please let me know!

Newsletter No. 98 with Six New Images 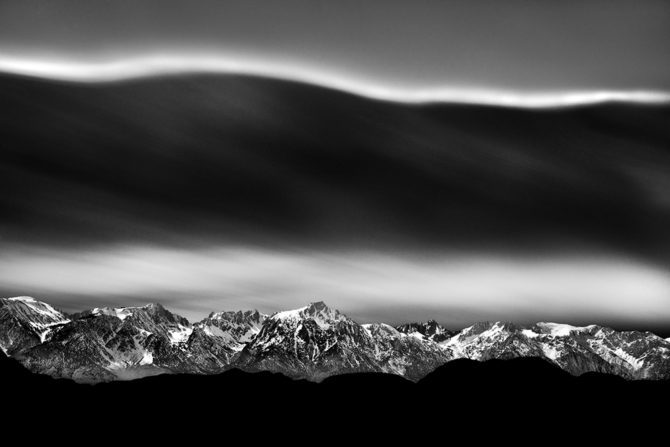 “Sierra Wave” was created just to the east of Mt Whitney, the dark peak just right of center. A Sierra wave is a cloud that is formed when strong winds from the west hold the cloud front at bay, often forming interesting structures such as this one.

Along with this image, I’ve introduced five new “Ancient Stones” images from the Alabama Hills, which is located at the base of these mountains.

If you’re subscribed to my newsletter, it’s waiting for you in your in-box. If you’re not subscribed, then you can sign up here: http://www.colethompsonphotography.com/NewsletterSignup.htm 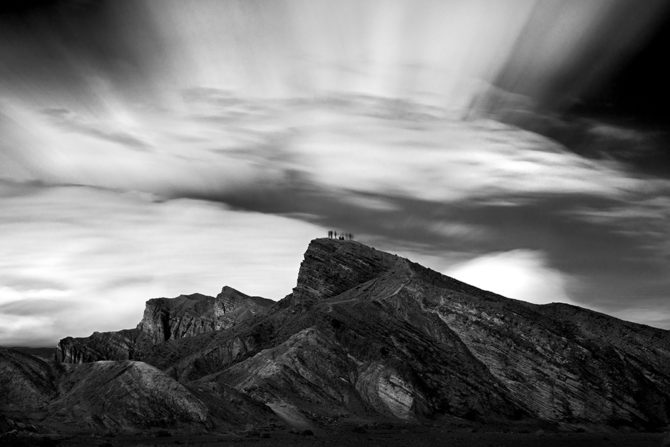 When I told my father that I was heading back to Death Valley for three weeks, he said that he couldn’t imagine why anyone would go back there twice! He said that he had been there once and there was nothing to see.

This is my 10th year and I cannot imagine running out of things to see. And even if I did, I’d still go for the peace, quiet and tranquillity. It has become my annual photographic and spiritual pilgrimage.

In this newsletter I’m introducing five new images, and will introduce several more in the weeks to come.

If you are signed up, you’ve already received the newsletter (it’s different from this blog).

If you are not signed up for the newsletter, then you can do so here: http://www.colethompsonphotography.com/NewsletterSignup.htm

If you are not signed up for the newsletter, you can do so here: http://www.colethompsonphotography.com/NewsletterSignup.htm