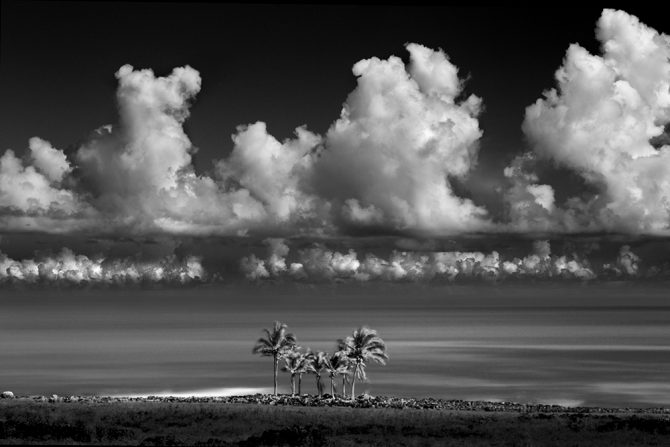 A photographer friend, George Digalakis, asked me to write this article for his blog: Inspirational Places. You can read the original article here: https://www.digalakisphotography.com/inspirations/ct-ei

How does one choose their favorite location? It would be like choosing your favorite image or favorite child!

Sometimes it seems like the last location is always my favorite location. And philosophically, I don’t believe an exotic location should be necessary for creating a great image.  My philosophical hero, Edward Weston, said the following when he was confined to a chair with Parkinson’s:

But I have been fortunate to travel to many incredible locations. And of all the places I’ve been, Easter Island has been the most significant to me. Why? Because it has been on my mind ever since I read Thor Heyerdahl’s book “Aku Aku” when I was 17 years old.

Now fast forward 47 years to when my wife and I were compiling our bucket list and I mentioned that I’d love to add Easter Island to the list, but that it really wasn’t feasible.  My wife asked: why not?  I didn’t really have an answer and so off we went in 2015.

Easter Island is known as the world’s most isolated inhabited place. I tell people that it’s really not that hard to get to, but it isn’t for the faint of wallet. It’s an expensive journey.

Easter Island is small, about 7 by 15 miles and has about 5500 inhabitants, some of which are the native Rapa Nui and also many Chileans. Only the Rapa Nui can own land on Easter Island. 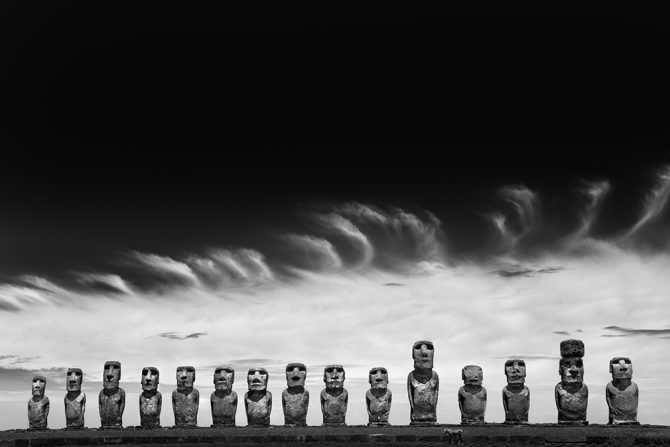 Easter Island is best known for its Moai, those monolithic statues carved by the ancients. There are about 1000 Moai on the island and about 30 standing on several different ahu’s or alters.

I spent two weeks there, circumnavigate the island 3-5 times each day. I focused almost exclusively on the Moai and created three portfolios: 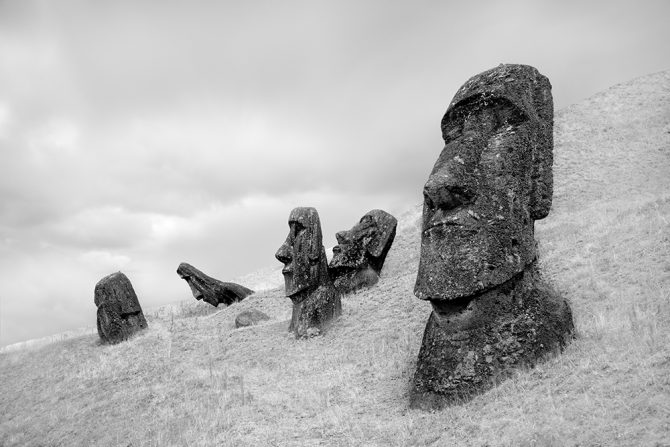 The Moai of Rano Raraku 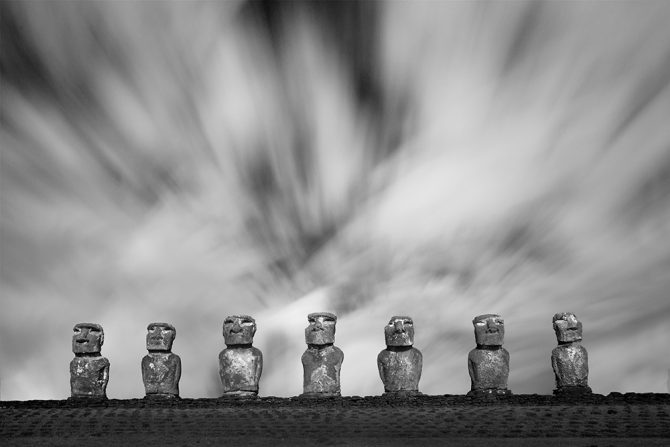 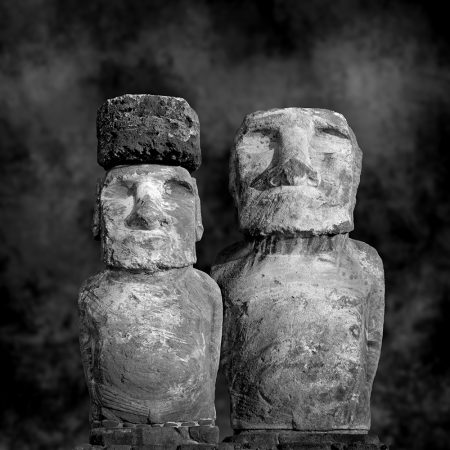 The portfolio I am most proud of is the “Moai, Sitting for Portrait” and how it came about. Here is my artist statement:

In January of 2015 I spent two weeks photographing the Moai of Easter Island. This fulfilled a lifelong dream, one that started when I was 17 and read the book “Aku Aku” by Thor Heyerdahl. I became fascinated with the Moai and they have been on my mind and influenced my art for these many years.

As I traveled to Easter Island and tried to imagine what I would encounter, something interesting happened: I fell asleep and dreamt that I had invited the Moai to come and sit for a formal portrait.

When I awoke I thought “why not?”

I knew there would be challenges: the Moai are reserved, aloof and almost unapproachable. They had suffered greatly at the hands of outsiders and the question was: would they come to trust me?

Distance was the first hurdle to be overcome: the island is small by automobile standards, but when we are talking about the Moai who walk everywhere, traversing the island to get to my makeshift studio could be difficult. Then there was the Moai’s physical condition: many were incapacitated by war and the ravages of time and could not make the journey. And how would I accommodate the size of the Moai, with some towering 33 feet tall?

Facing these challenges and armed with nothing more than a dream and hope, I issued the invitations…but would they come?

Initially only a few came; the younger and less suspicious ones. But slowly, as word spread of their experience, others started to arrive.

Photographing the Moai created some interesting situations: one older Moai refused to allow me to photograph his face and turned his back on the camera. Another arrived with a hawk and insisted on having his portrait taken with the bird atop his head. Several Moai with bullet wounds, inflicted by outsiders, insisted that I document those scars.

And there were tense moments, as two rival Moai came together face-to-face in the studio, but which ended well when they agreed to be photographed together. And there were touching moments as old friends were reunited after years of separation.

The Moai are quiet, stoic and could even been described as “stone-faced.” And it’s true, not once was I able to photograph a Moai smiling, but instead they have a dignified poise that transcends time.

It was a lifelong dream that brought me to Easter Island and a sleeping dream that caused me to create this portfolio. 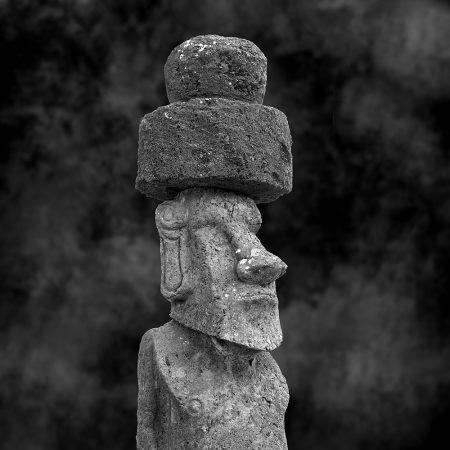 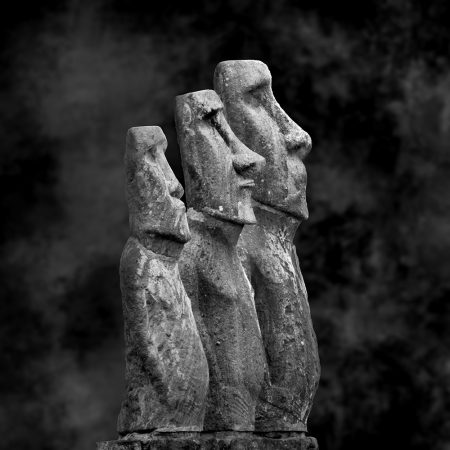 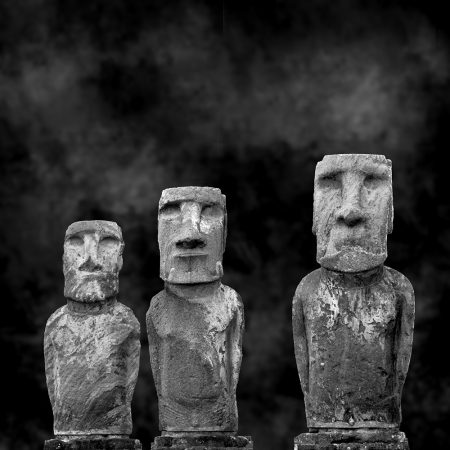 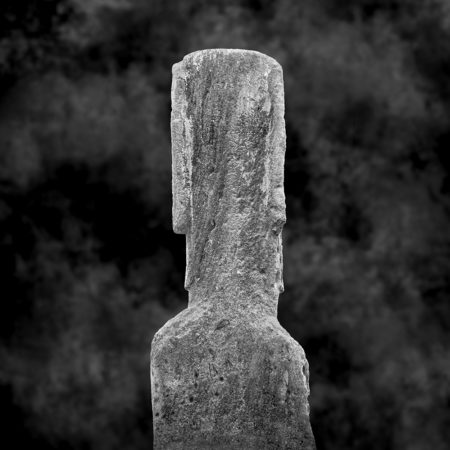 See all of the Moai portraits here