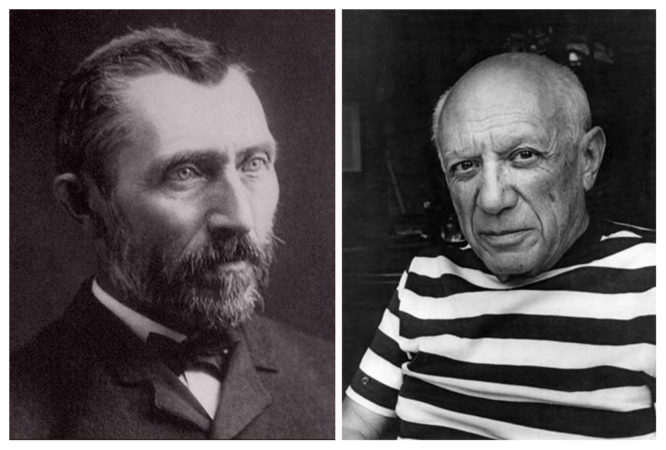 Pablo:  Vinnie, how have you been?  That’s a wonderful new piece you’ve created, what do you call it?

Vincent:  I’m not sure, maybe “Big Moon in Sky” or something like that.  My friend Don suggests I call it “Starry Night.”  He wants to write a song about it!

Pablo:  I agree, personally I wouldn’t ever purchase a painting if it used those paints.

Vincent: Agreed, what are those other painters thinking?

Pablo:  This canvas is nice, what is it?

Vincent:  It’s a new canvas, out of Germany and I like the texture on it but it’s still not exactly what I’m looking for.  I’ve been searching and searching for the right canvas and I’m just not happy with anything yet.

Pablo:  I know what you mean, I’ve been searching for years for the perfect canvas and will not rest until I do.  Hey, I’ve been noticing the perspective on this piece and it leads me to believe that you’re using a 54? easel?  Placing your canvas a little higher are you?

Vincent:  Yes but not a 54, it’s a 57 and combined with those new Hartford stools (they have a great padded cushion) I sit so much higher and really like the feeling when I’m working.  Plus, they adjust so easily.

Pablo:  Wow, I’ll have to check those out, I think Al’s apothecary is carrying them.

Vincent:  I heard a rumor that you’re trying some of those new camel hair brushes?  Tell me it isn’t so Pablo!

Pablo:  Where did you hear that?  It’s true, but I’m not telling anyone.  They are so much better than the cat hair brushes that I normally use.  Have you tried them?

Vincent:  I wouldn’t be caught dead with one of those, do you know what would happen people found out that I was using Camel hair!  I don’t have to tell the scandal…

Pablo:  I see you’re using those new frames from Friar Wilson, how do you like them?

Vincent:  Pretty good, they’re a lot cheaper so my margins go way up.  I need a little extra “ching” so that I can purchase that new satchel from Mary the Seamstress.  Have you seen it, it matches my frock and is really nice for carrying around my supplies.

Pablo:  Yes, those are nice, but not as nice as those wild colored ones made by the Maid Vivian!

Vincent:  Look at us, talking about paints, easels and brushes.  Does any of this really matter?  I mean, do you think photographers sit around and talk like this?  I suspect not.

Vincent:  Perhaps it ought to be more about the art?

P.S. An accomplished painter friend read this post and said that this is exactly how painters act! And I thought that only we photographers were overly focused on our equipment.