Lone Man No. 59 – The Story Behind the Image 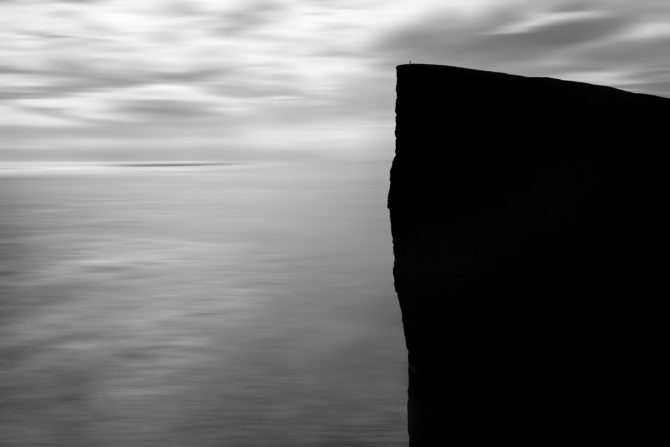 This is my most recent “Lone Man” image, Number 59. It was created on the Faroe Islands and is significant to me because it is my daughter-in-law Erica who is the lone man! Just off to the right and out of sight is my son Cody with their daughter Margot in a backpack. (It drove me crazy watching them near those cliff edges)

I have a terrible fear of heights. It’s almost debilitating. I either feel drawn over the edge or I feel like I’m going to collapse. And the longer I am near the edge, the worse it gets.

For this shot and several others, I am sitting 6″ away from the edge with my tripod collapsed low to minimize the wind. How high up was I? At least a mile, maybe two! (well, it felt like it and it was very, very high up)

I was shooting multiple long exposures that were sometimes four minutes long. I’d have to sit very still and keep downward pressure on the tripod to keep it from moving. After about 20 minutes of this, I couldn’t stand it any longer and had to crawl away from the edge.

I went back to this site several times during my trip and each time it got harder and harder to be near the edge.

The man whom I rented my apartment from was a police officer and he said that every year a tourist or two would go over the edge somewhere on the islands. And when that happens, there are no rescues, only retrievals.